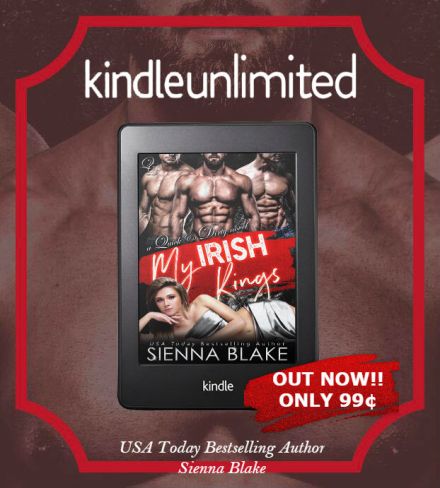 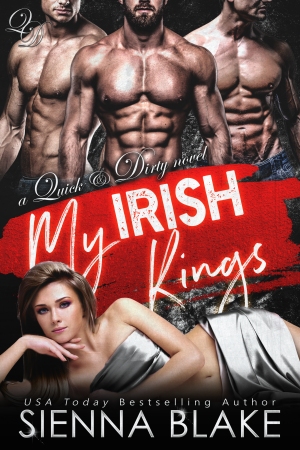 Five years I’ve been kept under the control of Ireland’s most vicious gang leader. Now that I’m eighteen, he’s forcing me to marry him. I’d rather die a thousand deaths.

I escape to the only place I can be safe–home of my captor’s biggest rival, the Irish Kings.

There’s X, the living weapon with a haunted past. His vicious touch helps release all this anger in me.

Jace, the teddy bear with a warrior’s heart. His melodic Irish brogue is a balm to my soul.

And Magnar King, their intimidating leader. Whose eyes flare with hunger when I’m near, yet backs away like I’ve burned him when we touch. He doesn’t remember me. But I remember him.

They’re all so different. But they all make me feel safe. They awaken needs in me—strange needs.

I want all of them.

But I just might need all of them to heal.

Can I request that this book be made into a full-length novel?  I have so many more things I want to know about these people and this world.  I was so wrapped up in everything Irish Kings, and I loved every second I spent reading My Irish Kings.

First, though I would have loved this book to be so much longer, there were so many things that could have been expanded on just for the excitement of knowing it, the story was complete, and I was satisfied with it.  It is a Quick & Dirty novel, so I knew to expect the brevity, I just didn’t anticipate connecting with the characters so deeply I NEEDED to know more about their backstories.

X, in particular, is still an enigma to me.  We were tantalized by hints of his past but never got the satisfaction of knowing anything about it.  X is exactly the kind of character that calls to my soul, and I wish, so deeply, that I would have understood more about how he became the man he was in this book.  He was so deeply destroyed, I could only guess what happened to him and hope that, now that he has found someone to care about him without reservation, he can finally begin to heal from all the sins of his past.

While I loved almost the entirety of the book, the epilogue felt strange to me.  It almost felt like it was written by someone else, then tacked onto the end.  It didn’t seem to have the same ease and mood as the rest of the book and left me feeling a little disappointed at the exact moment I should have felt content and full of hope for the characters.  There was also a fairly notable continuity error concerning Charli’s eyes; in one chapter Waylyn describes them as being chocolate brown, but in the next Magnar says they are grey, like her mother’s, and a few other minor editorial issues that need to be addressed. 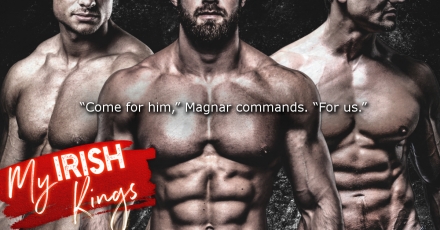 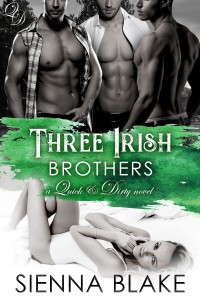 I used to think I was one of the lucky ones.

But at twenty-six, I’ve left my life in New York behind—my perfect fiancé, my stylish friends, my high-flying marketing career—and moved to Ireland.

Truthfully, my perfect fiancé is now my ex after I walked in on him face-deep in my best friend’s p***y.

And my career? It’s over. Because that cheating ex-fiancé of mine… he owns the company I worked for.

I know. I know. Don’t screw your boss. Trust me, I’m never making that mistake again.

On my way to the remote Irish farm I’m now working on, my car hits a ditch. I’m rescued by the three sexiest men I’ve everseen.

Broad shoulders, strong arms, accents that make me wet just to hear them.

I want them. All of them.

I know they all want me.

Turns out they’re my new bosses. 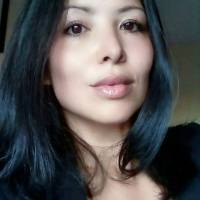 Sienna Blake is a storyteller & ink slinger, word spinner of love stories with grit, and alter ego of a USA Today Bestselling Author.

She loves all things that make her heart race — roller coasters, thrillers and rowdy unrestrained sex. She likes to explore the darker side of human nature in her writing.

If she told you who she really was, she’d have to kill you. Because of her passion for crime and forensics, she’d totally get away with your murder.

Sign up for my newsletter and get Paper Dolls, a full-length romantic suspense as a thank you gift. You’ll also be the first to hear about new releases, sales and giveaways ► www.subscribepage.com/SiennaBlake