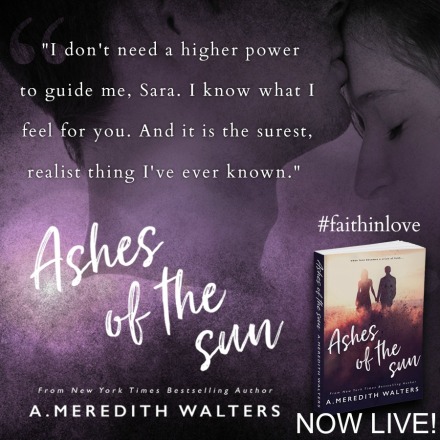 I was raised to believe in things you can’t see.

It is the foundation of everything. I am taught to accept the unacceptable. To embrace the terrifying.

To give everything to my family.
To my church.
To my god.

Because I have a purpose. I have been trained for my calling for as long as I can remember. As an acolyte for the Gathering of the Sun, I am taught that my life isn’t my own. I worship. I serve. And when the time comes, I will greet my fate with open arms and a sin free heart.

People call us a cult.

We are judged. We are ridiculed and reviled. Pastor Carter tells me they will be lost when the end comes. So we hide ourselves away from their sick and dangerous world. And my soul is safe because I follow the path.

I am the perfect disciple. I am confident in my devotion.

Until doubt arrives wearing the face of a boy I never expected to love.

Bastian doesn’t follow the path. His destiny is his own. He paints me a picture of a beautiful world. His words contradict everything I have been told.

He invites me to live when I have been prepared to die.
He gives me something new to believe in.
Love becomes the ultimate crisis of faith and now I am torn between two futures.
One that saves my soul.
And one that saves my heart.
***  AVAILABLE IN KINDLE UNLIMITED  ***
Amazon US | Amazon UK | Amazon AU | Amazon CA

I am fascinated with cults if there is a documentary about a cult you can bet I’ve either already watched it or have it sitting on a to watch list waiting for me to have the time to devote my full attention to it. So, of course, cult-based fiction is something I love and read whenever I have the chance. Ashes of the Sun delivered on my voyeuristic need to understand what makes a person join a cult or stay in one after they’re old enough to leave on their own.

I’ve long held the belief that certain books, excellently written books, can make you feel things beyond the emotions conveyed. Ashes of the Sun made me feel grimy; perhaps it was the unkempt hair or the lack of proper hot water. Maybe it was the precise descriptions of the physical labor the ‘disciples’ were required to perform, or even the subdued yet meticulous details given about their living conditions and wardrobe. All I know is I could feel the squalor Pastor Carter’s followers were forced to live in as if it was the clothes I wore; it was sublime.

Sara’s evolution in this book was everything. While it was obvious she wasn’t the perfect paradigm of devotion she showed to her ‘brothers and sisters’ equally apparent was her uncertainty about the life her mother had forced upon her. Her outward behavior, especially in the beginning, was occasionally frustrating, but the moment she stood up for Bastian and rebelled against the conditioning she’d experienced for her entire life, I knew she was stronger than her indoctrination. When she finally shed her cocoon and spread her wings, I was elated.

Bastian, while paramount in inciting Sara’s character arc, is still a bit of a question mark to me. In the context of this part of their story, it seemed right. We found out enough about him and his motives to understand his role in this story, but much like this book being centered in Sara’s world it also needed to be focused on her character. I loved him; desperately, for what he did for his brother and the spark he lit in Sara’s mind, he was the perfect counterpoint and support for both of them. I can’t wait to see more about him in Tears of the Storm.

Ashes of the Sun started slowly, and there were times I was frustrated with the speed it was progressing, looking back, however, that careful world building was essential to the aesthetic of the cult. It gave the novel a feeling of routine and complacency until the brothers, David and Bastian, arrived. The subtle changes in pacing as the story went on and Sara began admitting to herself that The Gathering wasn’t’ everything it purported to be gave the story a growing sense of foreboding and urgency. I loved how wonderfully Ms. Walters mirrored those two aspects of the book.

Ashes of the Sun is the first book in A. Meredith Walters’ The Gathering of the Sun duet. These two books will form one complete story and must be read in order. The novel is written in dual first-person perspective, narrated by Sara and Bastian.

A. Meredith Walters won my allegiance years ago with her Find You in the Dark series. Her writing completely enraptured me in that book, and she continued that intoxicating style in this novel. That, paired with her respectful treatment of sensitive subject matter makes her a go-to author for soul and heart-shattering reads.

There was a horrible noise. The kind that came from the depths of your soul. It ravaged. It destroyed.

His scream pierced my heart and I knew what had happened. An irrevocable shift. Like an earthquake. Like the end of the world.

I waited outside listening to the cacophony of pain. The rise and fall of misery that came in waves. Bastian’s cries. Anna’s wails.

And then total and complete silence.

I took a breath and waited.

I closed my eyes and wished for the sun. It had always been my comfort. Reliable. But there was only darkness. Pitch black night that went on and on.

A door opened. Then it slammed shut. I could smell the subtle scent of wildflowers and shampoo that always lingered around Anna. I opened my eyes in time to see her run towards the house she shared with her father. I could hear her sobs and longed to go after her. Yet she never looked my way. She never sought me out. Our link had been fragmented.

That realization squeezed and contorted my heart. It shifted and strained into something unrecognizable.

In that moment I was filled with an awful self-loathing. I couldn’t have stopped it. Not really. I knew what each of us would be asked to do. My entire life had hinged on that one absolute fact. But since Bastian, I knew it didn’t have to be. That it shouldn’t be. I had rejected my Awakening.

I shivered at the memory of Pastor Carter’s righteous anger. In those seconds after my denial, he had looked like the worst kind of monster. And I had finally accepted everything Bastian had been telling me. I teetered over the cliff with nothing to brace my fall.

So David became the first. He made his choice. No one could have altered his plan. The ruined man that had arrived all those months ago had already been set on his course. He had come to The Retreat wanting the lies Pastor fed him. His heart was clouded by promises that would never be realized.

It’s not my fault.

I kept telling myself that. Yet, I felt guilty all the same. As if I was complicit in David’s fate and Anna’s anguish.

I could have done something…

I should have known…

I berated myself over and over. Pummeling my conscience into oblivion. My legs could barely support the weight of my shame.

Then he was there.

The air stirred around me as he invaded my space. My comfort and my calm.

His eyes red and puffy. His complexion ashen. But I could feel his rage. It tasted like a bitten tongue.

“Did you know?” His question was a demand. It was an accusation. But at its core, it was quaking, overpowering fear.

I shook my head, the words that would accompany my denial stuck in the back of my throat.

I hadn’t known. But I should have.

But my disgrace was my own. I couldn’t let him carry that burden. Not now. Not after David. Staring at the man I had come to love in all ways that mattered, I couldn’t imagine him coming back from this. Healing seemed like some far-off concept.

But there was steel in his bright blue eyes. A tightness to his mouth. And I knew that he was stronger than anyone gave him credit for.

He would burn this unbearable world to the ground and stand in the ashes.

Bastian’s gaze cut through me. “You didn’t?” I knew he had to ask again. He had to be sure. A betrayal of that magnitude would never be forgiven. He wanted to trust me. But this place had made a mockery of faith.

The silence inside the common room was louder than his voice. For the first time in my life, I hated it. I found no solace in the heavy presence of the others. I resented their mute acceptance.

I hated everything they were.

They had decided to cast me out. An exile of my own choosing, Pastor had said. And now they had taken something from the man I loved. Taken a piece of him that he would never get back.

But they wouldn’t take me. That I could give him freely. For once, the choice was well and truly mine.

“No, Bastian. I didn’t know. But I know now.” I took his hand. I squeezed it tight. I dug my fingers into his skin until he saw my truth. He’d bleed with it.

His face softened. Anger seeped away. His tears fell. One at a time. But he continued to stand. Holding himself up. Holding us both up.

There were cracks. But he wasn’t broken.

“I know now,” I whispered, my own cracks splintering me apart.

He lifted my hand to his mouth. Held it there. The barest of touches. And when he let me go, the ground opened up beneath us.

But we wouldn’t fall in.

“We have to go,” he said, his entire body shuddered and then stilled. The steel returned.

And still the silence…

Then I made a decision. One I wasn’t entirely sure of. One lacking in confidence but comprised of the deepest type of emotion.

It washed away everything else.

“Then let’s go.” I wouldn’t smile. Neither of us could bear the facade of joy.

Instead we would face grief together.

Bastian took a shaky breath and pulled me to him. Crushing me to his chest his lips found mine. Bruising, not tender. He poured the horror of the past twenty-four hours into me. I swallowed it up.

We would leave. There was no other plan to make. No other choice but the one that unfolded before us.

We’d run as fast and as far as we could.

Away from the fire.

I would learn to live with the cold. 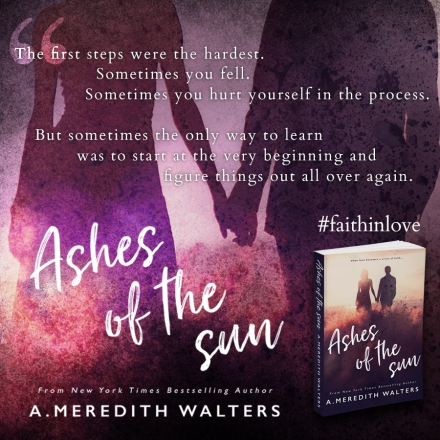 The New York Times and USA Today bestselling author of Contemporary and New Adult romances including the Bad Rep, Find You in the Dark, Reclaiming the Sand, and Twisted Love series.
Facebook | Website | Twitter | Goodreads