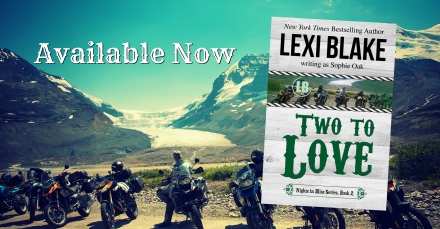 Growing up in the eclectic, small town of Bliss was wonderful for Callie Sheppard. She loved everything about it, except for the lack of potential romantic partners. She only went wild once in her life, sharing a perfect weekend in Dallas with two incredible men she never thought she would see again. When they parted, she was left with a hole in her heart she feared would never be filled.

DEA agents Nathan Wright and Zane Hollister were thrilled when Callie agreed to spend the weekend with them. Just days away from a long, undercover assignment, they considered this passionate affair to be an ideal way to spend their last days of freedom. They never expected to fall in love. Leaving her behind was the hardest decision of their lives.

Six years later, Callie is preparing to break in a new sheriff after Rye Harper walked out on the job. Her heart skips a few beats when the man walking through the door is none other than Nate Wright. Nate and Zane have come to Bliss, but their time undercover has left them broken and scarred. The boys are determined to win back Callie’s heart. But when the criminals they took down come seeking revenge, Nate and Zane may have to save the strange little town of Bliss before they can reclaim the woman they love.

I’m happy to have revisited Bliss; it’s such an interesting little town with fascinating residents.  All of that made better by the beautiful storytelling of Lexi Blake.  Calle, Zane, and Nate’s story was a little sad, a little funny, a lot provocative, and fabulously engrossing.  Once I started reading Two to Love, I couldn’t put it down and devoured the entire thing in one sitting.

Two to Love is the second book in Lexi Blake’s Night’s in Bliss, Colorado series.  It can be read as a standalone, though the characters from book one do make an appearance in this book.  There are also tie-ins to Lexi Blake’s other series, which only serves to enrich the entirety of the world she’s built.  Two to Love is written in third-person alternating limited perspective, switching between following Callie, Nate, and Zane’s thoughts.

I fell in love with Callie in Three to Ride; there was something about her in that book that just felt so sad even when she was happy for friends.  Seeing her strength, despite the heartbreaking and life-threatening situations she found herself in, was so great.  I loved how she refused to settle for less than she deserved and fought for what she needed and wanted.

Zane was the standout, amongst the boys.  He was so tragic, so self-sacrificing, and ultimately the better man amongst himself and Nate.  I struggled with Nate, not because he was unlikable – even in his egotism there was something vulnerable about him – but because he was so wholly focused on what was ‘right’ he neglected to observe that what was right for him was far closer than he could fathom.

Lexi Blake is almost on top of my must-read authors.  She does such a fantastic job of making her characters likable, even when they shouldn’t be.  Her relationships always feel so well-developed, the characters care for one another so profoundly; they’re something to strive for.  I love her writing style and always look forward to reading anything she releases. 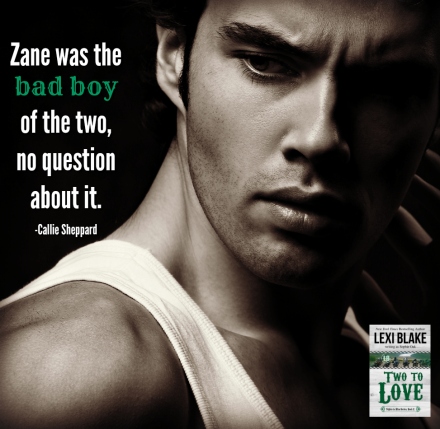 It wasn’t that she minded losing her virginity. She wasn’t doing anything interesting with it in the first place. It needed to go, but now she worried this wasn’t the way to do it. She wanted some affection and kindness. Would they give that to her? Oh, god, Stef had found her two guys for her birthday. She’d made him a loaf of zucchini bread and shared a bottle of cheap wine for his. What was she doing?

Could she run? She was naked. That didn’t really bother her, but it could confound a lot of people.

“Hello.” The deepest voice she’d ever heard pulled her from her panic.

She turned and hoped there wasn’t a line of drool running out of her mouth as she caught sight of them. Best birthday present ever. Stef might be straight, but he knew how to pick gorgeous men.

She climbed as gracefully as she could off the big bed and faced them. They were perfect. The one who had spoken was tall. She doubted she would reach his shoulders when she stood against him. He was at least six and a half feet, and his body was corded with muscle. Every piece of him seemed chiseled out of granite. He was male model perfection, with a strong jaw and piercing green eyes. His hair was inky black and curled sweetly over his ears.

His partner wasn’t quite as tall but still was no small man. He was a few inches shorter than the gorgeous monster, and his body held a lean strength. If the black-haired devil was a linebacker, this man was a swimmer. His eyes were a stark blue. His skin was sun kissed and smooth. Callie was fascinated with the idea of soft skin covering steel. His hair was cut in a military style. It was a rich brown. The intimate light of the room caught the gold and red streaks. He looked like a man who laughed often.

Everything inside her heated up at the sight of them, and she wasn’t so scared anymore. Why the hell would she run from all that hotness? And they were handpicked by a man who would never, ever hurt her. She was safe with them.

“Hello.” It seemed like a dumb thing to say to two glorious men when she was naked as the day she was born, but it was all she could think of.

“Hello, Callie.” The other man’s voice was deep, too, but there was an inherent friendliness to his Texas accent. It looked like Stef had found her a couple of cowboys. The blue-eyed man watched her. He gave her a small, calm smile, like he didn’t want to scare her. “Are you nervous, sweetheart? We don’t want you to be. Nothing happens here that you don’t want. All you have to do is say the word and everything stops.”

Their eyes were on her body. Callie had never thought much about her body before. It was a natural thing. She’d grown up in a household where nudity wasn’t frowned on. She was comfortable in her skin, only now she wasn’t. Now she was starting to feel hot and restless. They weren’t avoiding her private parts the way the nudists politely did back in Bliss. These men stared boldly at her breasts, and her breasts seemed to be staring right back. Her nipples were hard nubs.

“Do I get a safe word?” The question came out on a breathy sigh. She’d always wanted to know what it felt like to truly submit. Stefan’s subs always seemed satisfied.

The blue-eyed man’s mouth turned down. “Your safe word is no. We don’t have to play games. All you have to do is say no and we stop.”

“But we can play games if you want to.” That came from the big guy. His husky voice did all sorts of things to her libido. He walked boldly up to her and placed his hands on her hips. His touch lit up her skin. “Do you want to play, darlin’?”

Oh, yeah, she wanted to play. 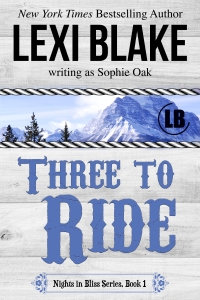 Re-released in a second edition with two new chapters and additional new content.

Rachel Swift is a woman on the run.

A stalker sent Rachel’s world reeling. Now she’s running for her life, and Bliss, CO, seems like the perfect place to hide. Bliss is a strange little town, filled with artists, nudists, and the occasional conspiracy nut. It’s a good place to start over.

Max and Rye are just the men to catch her.

Horse trainer Max and Sheriff Rye gave up on their dream of finding one perfect woman to share long ago. Rachel walks in, and they’re both in love and fighting their true natures.

When Rachel’s past catches up with her, all of Bliss is in danger. Rachel knows she should run, but how can she leave behind the love she’s found with Max and Rye and the home she’s built in Bliss? With her whole town behind her, Rachel is ready to make her stand. It’s time for her to get back in the saddle and ride.