From the New York Times bestselling author, K. Bromberg, comes a new series about three brothers, the job that calls them, and the women who challenge them.

“I hate you. I never want to see you again.”

Grant Malone is not the reason I moved back to Sunnyville—at least that’s what I tell myself. Yet, those parting words I said to him back in third grade, ring in my ears every time a townsperson brings up one of the Malone boys. I thought time had healed my wounds. I was wrong. Nothing could have prepared me for how I felt when I finally saw him again.

Twenty years does a lot to turn a boy into a man. One who hits all my buttons—sexy, funny, attractive, and a police officer. But Grant is off limits because he knows too much about my past.

But I’m drawn to him. That damn uniform of his doesn’t hurt either. It’ll be my downfall. I know it.

That’s why I’m shocked to see her all these years later. The shy girl I once knew is all grown up.

Adventurous and full of life, she owns my heart now, just as much as she did back then. Convincing her of that is a whole different story.

I’ll give her the one night she asks for—like that’s a hardship—but when it comes to letting her walk away after, she has another thing coming. There’s no way in hell I’m letting her go this time without a fight.

Occasionally I read a book that completely belies my expectations; this is one of them. Neither the blurb nor the cover begins to hint at just how heavy Cuffed is. I had expected an angsty friends-to-lovers romance, but this was so much more. It dealt with incredibly heavy themes and the fall-out from the choices that are made in an effort to help others.

After finishing the book, I found that I was unsure of my feelings regarding Emerson. Her past garners my full sympathies and motherly love, but her prickly, flighty, standoffish personality in the present makes it hard for me to understand her appeal as an adult. I know a lot of her behavior was a defense mechanism and perhaps part of her appeal is her refusal to commit to anything permanent, I just found her frustrating.

The Grant we got to know in the book seemed nothing like the Grant his brothers and partner talked about in reference to his past behavior with women. I’m glad we didn’t see that aspect of his behavior because it would have been off-putting. As he was in the book Grant was amazing. I loved how caring he was in relation to both the people he loved and the people he was entrusted to serve and protect. It was immediately apparent he was the type of person who would do anything it took to make sure innocent people are safe. He is the quintessential good cop.

Broken promises and rules were an essential plot point in Cuffed. Almost every significant development in both Emerson and Grant’s lives was caused by breaking a rule or promise. All of those broken things resulted in momentous life changes and new outlooks for both of them. I also appreciated how heavily the idea of trust and how people can manipulate it was used in Cuffed. It was interesting to see how all of these things that are easily broken were tied together in a story about taking the broken pieces of a person and knitting them back together into a whole and happy person.

I wish I had a better grasp on where this story was taking place, usually I can place myself inside of the world of a book but the locations in Cuffed seemed very disconnected to me. Perhaps a better handle on where Sunnyville is and where the primary locations are in relation to one another will come as the series progresses. I also felt like there were some storylines that seemed specific to this book but were never fully fleshed out; particularly the situation with the other person vying for the promotion Grant wanted with and their fathers. I hope to find out more about what went on there because it seemed to be a significant event in the Malones history.

While I had not read a K. Bromberg book before this one, it felt familiar, comfortable. Her writing was fluid and straightforward. It wasn’t a book that pushed my limits but one that kept me fully invested in the story. I’m sure I’ll continue to return to her books when I want to read something that makes me feel like I’m catching up with an old friend. 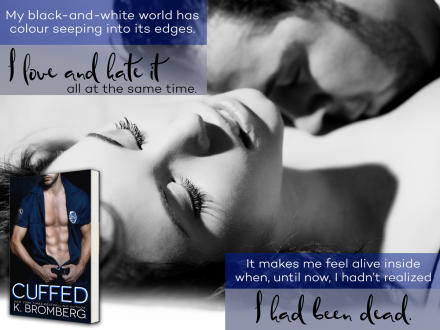 New York Times Bestselling author K. Bromberg writes contemporary novels that contain a mixture of sweet, emotional, a whole lot of sexy, and a little bit of real. She likes to write strong heroines, and damaged heroes who we love to hate and hate to love.

A mom of three, she plots her novels in between school runs and soccer practices, more often than not with her laptop in tow.

Since publishing her first book in 2013, K. has sold over one million copies of her books and has landed on the New York Times, USA Today, and Wall Street Journal Bestsellers lists over twenty-five times.

In April, she’ll release The Player, the first in a two-book sports romance series (The Catch, book 2, will be released late June), with many more already outlined and ready to be written.

She loves to hear from her readers so make sure you check her out on social media or sign up for her newsletter to stay up to date on all her latest releases and sales: http://bit.ly/254MWtI