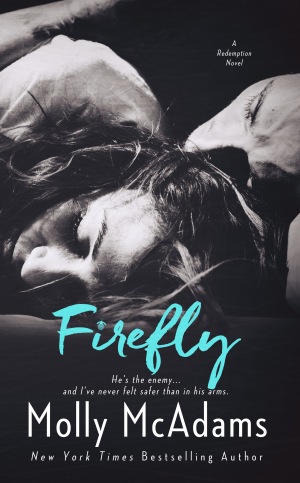 As the Princess of the Irish-American Mob, there’s no shortage of men ready to help guard and protect me. To slowly suffocate me to the point of seeking freedom—a place where I can breathe.

Kieran Hayes has been saving me for as long as I can remember. It’s in his blood, and one of the many reasons I fell in love with him. Until my favorite trait became his biggest flaw, making me resent the man I love. An unwavering warrior, his love for me has been shrouded by those instincts.

What I wasn’t prepared for was Dare—the man who would set my world on fire with just one touch. He saw straight through to my soul, as though he knew I was desperate for freedom, and silently demanded my heart from the beginning.

And I didn’t expect Dare to be Demitri Borello—the reason for so many deaths in my family. A man who will take my life the moment he finds out who I am.

Despite it all, I’ll love him until that moment comes.

A fire will die if there is no oxygen for it to consume. Ours is rapidly stealing every last breath we can sacrifice to it.

***The Redemption series is a series of romantic suspense standalones***

This book was a slow burn.  When I was reading I found it somewhat frustrating but upon completion of the book, it was well worth it.  Gah.  I am not quite sure how to explain what the experience of reading Firefly; all I can really say is that it was fascinating and worth the singed nerves.

Firefly is the second book in Molly McAdams Redemption series.  You absolutely do not need to read both books to understand what is going on.  While they occur in the same world they are only tangentially connected. No character crossover, no (real) storyline crossover, no cliffhangers. Each book is a complete standalone. The only relation between the two is that they both deal with the seediest parts of the underworld.  And they do that well.

I’m not sure if I should classify this as a love triangle or not.  For one person it definitely was, for the others, not so much.  It was an interesting dynamic to know how Lily was feeling about both Dare and Kieran, and how they were both feeling about her.  My heart for Lily because of how deeply hurt she’d been by all the people who were meant to love and protect her.  It was completely shredded for Kieran because he was trapped in a life, a role, a persona he absolutely loathed and no matter what he did he was going lose everything he wanted most.  Dare, however, was a bit of an enigma to me, he seemed to so easily compartmentalize the pieces of himself it was fascinating to see those different facets and how he dealt with his emotions in each role.

Firefly took a minute to find its wings.  The first half or so was full of tension building, of layering an intricate backstory for everyone involved in the book, and it was worth all that build-up.  Once the intense conflict began happening all those varied histories met and exploded in something that could have been easily devastating for all involved.  I appreciated how Ms. McAdams dealt with the fall-out and brought this story to a resolution that was appropriate for the characters.

Molly McAdams writing is always great.  She’s uniquely capable of playing her readers’ heartstrings like a virtuoso.  It’s in the way she’s able to convey what an emotion feels like, that unique physical reaction – one each person experiences in their own, slightly different way – with such accuracy, that makes her stories sing.  I love how her stories build in magnitude and complexity as they go on, until they reach a soaring peak, then resolve with a perfect harmony. 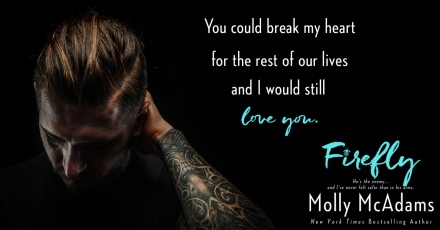 “Nothing’s getting past me,” I assured her.

Her breath washed over my lips as I leaned in to kiss her again when she whispered, “I thought we were talking about you.”

I paused for a few seconds, then looked up into her hazel eyes. “What?”

My brow pulled tight, and I forced out a low, frustrated laugh. “Me.”

She nodded again, the movement of her head so slow as her eyes explored mine. “I need you to let me go for so many reasons, but I easily forget why when you don’t. I think there was a reason neither of us crossed that invisible barrier before today. Because being in your arms?” She hesitated, her tongue quickly darting out to wet her lips. “Trust me, it’s dangerous.”

A weight pressed down on my chest, making it hard to breathe. Because damn it if she wasn’t right.

There were dozens of girls over the years who’d meant nothing more than a night. Maybe two. Not one could I remember the name of, most I couldn’t remember their face.

Then there’d been one who I would’ve sold my soul for if I could’ve had one more night with her.

My days with her had been everything. A slow burn that had built over time until I hadn’t been able to get enough of her. Until she’d meant too much.

And there hadn’t been a girl since.

Not a second glance. Not a thought. Nothing.

Until one morning at Brooks a few years ago.

But there was nothing slow about the thoughts and needs for the girl pressed against me. There hadn’t been since the very first morning I’d found her staring at a mirror like it had the power to destroy her world. Like that possibility fascinated her.

Fuck, if I didn’t need to find out why.

Dangerous was exactly what we were. Only she had no idea just how much.

My gut twisted as unwanted thoughts entered my mind, but I pushed them away. Because I knew what I needed to do. I needed to let her go and force myself not to follow.

But when there’s a flicker of light in your life after so much darkness, it’s impossible to stay away.

And this girl burned so damn bright.

Calling to me and beckoning me toward her, and I knew no matter how many times I let her slip away, I would follow her just to catch her again.

I brushed my thumb across her full lips. “Goddamn, firefly.” 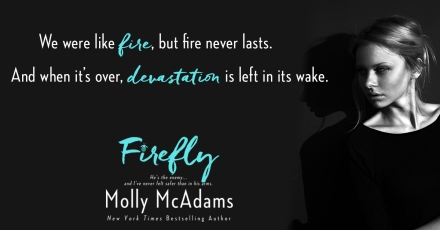 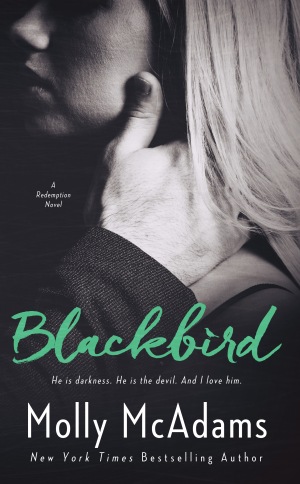 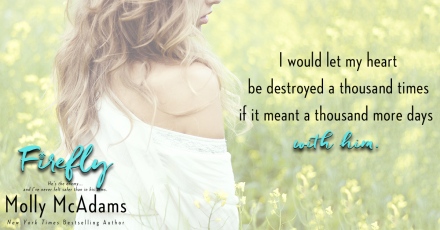 Molly grew up in California but now lives in the oh-so-amazing state of Texas with her husband, daughter, and fur babies. When she’s not diving into the world of her characters, some of her hobbies include hiking, snowboarding, traveling, and long walks on the beach … which roughly translates to being a homebody with her hubby and dishing out movie quotes. She has a weakness for crude-humored movies and fried pickles, and loves curling up in a fluffy comforter during a thunderstorm … or under one in a bathtub if there are tornados. That way she can pretend they aren’t really happening.

One thought on “Firefly by Molly McAdams ~ Sarah A’s Review”