Grayson Ford and Emma Kingsley–close since they were kids, opposites in every way. He’s the stuff high school crushes are made of, Mister Popular, and captain of every team. She’s artsy, cute, and not in his league, though fully aware of Summerland’s “I Dream of Dating Grayson Ford” support group.

I can’t say no. The girl’s had my heart since before I knew it went missing.

He hides a life of hell. His father hates him, his mother’s gone. Emma is his only savior, yet she doesn’t know her power over him. She’s the only girl he wants, the only one he could ever tell–though he won’t.

I’m stronger, bigger, more of a man than he’ll ever be, but because I ruined his life, I’ve taken his crap, his attacks, the vulgar nature of his existence.

Until she discovers Gray’s embarrassment, his humiliation. Emma fights for him and for a chance. Theirs is a Cinderella story that she believes impossible. But as the layers peel back, it’s just a guy who needs a girl in order to keep breathing.

My mind is already doodling Mrs. Grayson Ford in imaginary notebooks. He has no clue where my head is at… But, given that I didn’t see what just happened coming, maybe I have no clue where his head is at either.

Only for Him. Only series, Volume One.

The second installment in the Only series. Must read book one first!!

First loves never die but Grayson Ford comes close. Bleeding out in a war zone, he barters with God. Bring him back alive, and he’ll make it right with his girl.

All I want is Emma. I need her, and I fight for her memory. A story. A smile. Anything. But it’s all blank.

Emma is not his girl anymore. Time has skipped by and life’s been hard. She strips to pay the bills, waitresses to fill the hours between classes and her third job. All while working to be the best mama she can be to the little girl who will never know her daddy. Even though Grayson abandoned her, she mourned his death. Until he calls, and everything she knew was wrong.

He’s back with one objective–Emma Kingsley–and she never sees it coming.

Only for Her. Only series, Volume Two.

The third installment of the Only series. Must be read in order.

Grayson and Emma. First love. True love. And… they have a daughter. Abandonment is his curse. He left his woman, survived his team, and missed the moment most precious to a father. Until now.

I didn’t know you were killing yourself with work. I didn’t know you’re raising our daughter. So help me God, had I known, there is no military force on earth that would’ve kept me from you.

Love needs to heal all, or they won’t survive the collision of their separate lives. Emma must reach deep into her heart that is barely hanging on and find forgiveness. Grayson, wrecked with PTSD-filled nightmares, must prove that he’s here to stay and able to rebuild his family against all odds.

I need to say I love you. But what I mean is I love you–in a way that defies definition and exists only in a world that you and I are in.

Only for Us.  Only series, volume three. 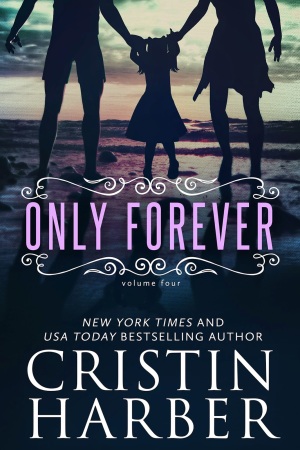 The fourth and final installment of the Only series. Must be read in order.

There comes a time when Emma must face the secret she kept from Grayson. But she never thought it would be while she stood on stage at Emerald’s. The seconds she has to convey that her life is in danger are lost in the devastation that she sees rip through him.

She pinches her eyes closed. “Don’t leave me. No matter how mad you are, please, please don’t leave me here alone.”

But there’s more on the line than just Emma’s safety. There’s the danger that brought Titan’s Delta team in to the strip club in the first place. A threat that’s too close to home, too close to the family, the daughter and woman Grayson plans to claim.

I push away the sudden spring of fear. Life’s too unknown, with hidden enemies and unseen terrors. The idea that I could lose her again… it’s unbearable.

A love story like Grayson and Emma needs a forever love, and somehow they’ll find their way to her fairytale.

Only Forever. Only series, volume four.

Holy Cliffhanger!  I am beyond grateful I have Only for Her to jump straight into.  I’m not sure my heart could handle leaving Grayson and Emma in the place we did for long.

Though this book was very, very short – by my standards – it was jam-packed with hard-hitting issues and emotions.  The book moves quickly and I found the beginning to be a little jarring, as the scenes and timelines switch so frequently.  It was immediately obvious the reasoning behind the swift timeline, I only wish I’d had a little more time to settle into the roller coaster that was the beginning of Emma and Grayson’s story.

I loved the dynamic between Emma and Grayson.  The balance they brought to one another, particularly the peace Emma gave Grayson when he so desperately needed it, was lovely.  The juxtaposition of nearly every aspect of their live gave an interesting dynamic to their coupling.  I particularly enjoyed the softness Emma was able to see and bring out in Grayson’s normally hard persona.

Cristin Harber wrote a hard-hitting beginning to her Only series in Only for Him.  When I first started the book, I was unsure of the writing but I because to engrossed with Emma and Grayson’s story I was no longer concerned with it.  I believe with a little time and devotion Ms. Harber won’t leave me even a brief moment to question her writing and it will quickly be on par with the stories she tells.

A little bit too sweet, a smidge too cliché, a lot sad, and altogether wonderful.  I freaking loved Only for Her.

The pacing of this series, thus far, had been great.  Its break-neck speed keeps me wholly engrossed in Emma and Grayson’s story.  It is so nice to not have chapters full of back and forth, will they or won’t they, everything is laid out quickly and plainly.  This writing style is perfection for a novella series.  I feel completely satisfied with the story given while desperately needing the next installment so I can continue finding out what will happen with Grayson and Emma.

I’m really happy Cristin Harber gave us the insight to what each of their liveswase like without the other.  I don’t think their reunion would have been so poignant without that.  There were moments, both before and during their reunion that made me heart hurt for them.  They had been through so much, I needed them to start to find healing in each other.  I can’t wait to see haw they deal with the fallout of finding their way back into each other’s lives.

Cristin Harber seems to have hit her stride in Only for Her.  It had none of the awkwardness of the first book and completely drew me in.  By the time I got to Grayson and Emma reconnecting, I was so engrossed in the story the rest of the book flew by without me even realizing I was nearing the end.

While I did enjoy Only for Us, it has been my least favorite book in the series.  There were a few moments that were great, but a lot that felt like filler.  It was fairly obvious, to me, this novella was primarily to set up whatever huge events will be happening in the final book.  Had this novella series been a single novel, I would describe Only for Us as the calm before the storm.

Only for Us may have been lacking in the intensity of the first two books, but there were several wonderful moments in it.  The best being those moments when Grayson is able to meet and interact with the daughter he never knew existed.  Those moments were among the best in the entire series.

Some of the scenes in Only for Us were likely the most important of the series.  One, in particular, was life-changing for Grayson, but I wish it was given more time and attention.  Maybe it was as brief as it was to show how little sway that part of the past held for Grayson, but I hoped for more.

I have mixed feelings about how this series ended.  I loved how Grayson and Emma’s story wrapped up, but I have SO many questions about Titan and Delta team and everything that went down with Emerald.  So. Many. Questions.  I think perhaps it was meant to be that way, as I’ll certainly be adding those series to my reading list.

The first third or so of Only Forever was rife with action.  So much so, I found myself having to go back and reread sections because I’d been so engrossed in the broad strokes of what was going on I missed the important details that were happening around the periphery.  It felt much like I’d imagine a situation like that being.  So much tension, preparation, and anticipation culminating in an intense burst of activity that is hard to take in all at once.  The way it was written perfectly captured the frantic pace of a high-risk operation.

The hope and healing that took place in the bulk of the end of the book was heart-melting.  The beauty of the moments in which Grayson realized Emma, Cally, Ryan, and the rest of the Kingsleys were always his family were incredibly touching.  Seeing him finally find the love and acceptance he always deserved was sublime.