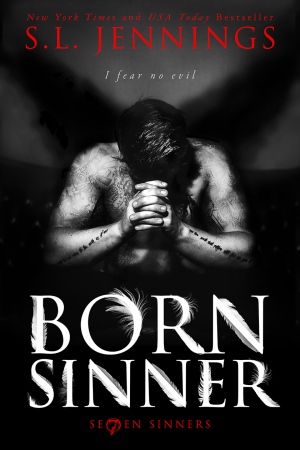 Twenty-two years ago, I was cut from a cold, sodden womb, and cradled in the filth and poverty of Chicago’s concrete arms. Statistically, I wasn’t supposed to survive these streets past the age of eighteen.

Fate had a different plan.

I was bred for one purpose and one purpose only: to unleash death and destruction on my world.

My thoughts are power.

My words are weapons.

Evil created me then grace tried to save me. But first… they tried to kill me.
They call themselves the Se7en. They are sin and salvation, and everything we’ve feared from the beginning of time. And their leader is the deadliest of them all.

And most importantly, he doesn’t distract himself with mortal weakness.

Kill one to save a million.

That’s what he told me when he took me as his prisoner.

Kill one to save a million.

That’s what he’s been trying to tell himself ever since he took me into his arms.

It has been a few days since I finished Born Sinner, and honestly, I’m still not sure how to put my feelings about it into words. At every turn, there were surprises I didn’t quite see coming. There were twists and turns that kept me on my toes throughout the entirety of the book.

While there were hints of the book being paranormal in the synopsis, I wasn’t fully prepared for it. And I’ve got to tell you, being slammed with it was jarring in the best way possible. I didn’t know how much I had missed the world of angels and demons. They’ve long been my favorite paranormal entities, and SL Jennings delivered them in a HUGE way.

I am in love with how wonderfully well developed the characters were in this book. They were so unique and complete; it was a joy to read about them. There wasn’t a minute where I felt Ms. Jennings veered off course from the personalities she had set forth for each character. Even the characters who were only in the book for mere moments had a sense of who they were as a person. It’s a unique skill, being able to represent your characters in a manner that they each have a sense of self, but it’s obvious in the reading of Born Sinner, SL Jennings has mastered that skill.

Born Sinner is a very plot driven novel. The characters are all rushing headlong into an inevitable future, one that could be tragic for everyone and it’s wonderful to watch unfold. There were moments that seemed a little rushed to me, but nothing ever seemed anything less than completely deliberate. There wasn’t one detail that felt extraneous. There were pieces that I didn’t understand until I was finished reading, but every single thing came back together by the end of the book, I was absolutely in love with the way Ms. Jennings plotted and executed this novel.

I can’t and won’t give away any details of this book, anything I could say about the characters or the things that happen between the covers would be a disservice to other readers. Born Sinner has to be experienced exactly as it was written, slowly and methodically uncovering the details that tie the bigger picture together.

Jennings is a proud military wife to her high school sweetheart, a mom of 3 rowdy boys, and a New York Times and USA Today Bestselling author of contemporary and paranormal romance.  When she’s not obsessing over book boyfriends, you can find her hanging out with a few epic fictional loves at independent bookstores or sipping Bloody Marys at her favorite brunch haunts in Spokane, Washington.  She’s a self-proclaimed food snob, makeup junkie, and lover of all things shiny, sparkly, and kitschy.