We are so excited to bring you the release information and review for Us by Elle Kennedy and Sarina Bowen.  This is the steamy conclusion to Him, a m/m novel featuring the lovable (and hot) hockey players Jamie Canning and Ryan Wesley.

Can your favorite hockey players finish their first season together undefeated?
Five months in, NHL forward Ryan Wesley is having a record-breaking rookie season. He’s living his dream of playing pro hockey and coming home every night to the man he loves—Jamie Canning, his longtime best friend turned boyfriend. There’s just one problem: the most important relationship of his life is one he needs to keep hidden, or else face a media storm that will eclipse his success on the ice.

Jamie loves Wes. He really, truly does. But hiding sucks. It’s not the life Jamie envisioned for himself, and the strain of keeping their secret is taking its toll. It doesn’t help that his new job isn’t going as smoothly as he’d hoped, but he knows he can power through it as long as he has Wes. At least apartment 10B is their retreat, where they can always be themselves.

Or can they? When Wes’s nosiest teammate moves in upstairs, the threads of their carefully woven lie begin to unravel. With the outside world determined to take its best shot at them, can Wes and Jamie develop major-league relationship skills on the fly?

At long last, I’m twenty paces away, then ten. Then I’m opening our door. “Hey babe!” I call out like I always do. “I made it.” I drag my duffel over the threshold, then toss my suit coat on top, abandoning these things beside the door, because all I need now is a kiss.

Only then do I notice that our apartment smells amazing. Jamie has cooked dinner for me. Again. He is the perfect man, I swear to God.

“Hey!” he calls, emerging from the hallway leading to our bedroom. He’s wearing jeans and nothing else except—and this is unusual—a beard. “Do I know you?” He gives me a sexy smile.

“I was going to ask the same thing.” I’m staring at the sandy-blond beard. Jamie has always been clean-shaven. I mean—we’ve known each other since before facial hair. He looks different. Older, maybe.

And hot as blazes. Seriously, I can’t wait to feel that beard against my face, and maybe my balls… Jesus. The blood is already rushing south, and I’ve been home fifteen seconds.

And yet I’m just stuck there in the middle of the room for a moment, because even though it’s been eight months since Jamie and I started up together, I’m still a little stunned at my own good fortune. “Hi,” I say again, stupidly.

He walks forward, his easy gait so familiar that my heart breaks a little bit. He puts his hands on my traps and squeezes the muscle there. “Don’t go away for so long. If you do that again, I’m going to have to sneak into your hotel room on the road.”

“Promise?” I ask, and it comes out like gravel. He’s close enough now that I can smell the ocean scent of his shampoo and the beer he drank while he waited for me.

“If I ever get a winning lottery ticket and a day off, I’ll do it,” he says. “Hotel sex after a game? Sounds hot.”

Now I’m measuring the distance to our sofa and counting the layers of clothes I’ll need to remove in the next ninety seconds.

Us is the steamy conclusion to Him, a m/m novel by the fantastic authors Elle Kennedy and Sarina Bowen.  I happen to be fans of both which led me start this series along with the desire to read another m/m which I hadn’t done in a long time.

The story picks up where Him leaves off and follows the two men on their journey through Wes’ rookie hockey season.  Trying to keep their relationship quiet is anything but easy and it doesn’t take long for the secrets and lies to take a toll on their relationship.  Jamie feels left out of Wes’ life and Wes spends all of him time traveling and missing the love of his life.

Wes’ teammates and Jamie’s family cracked me up and I see some spin-off potential from a couple characters which makes me happy since you know I love a good stand alone series.  But for all the chuckles, this book is nicely balanced with angst.  I can’t speak from personal experience but the trials and tribulations of being a gay man in a professional sport shine through for both men.  Jamie’s coaching is also threatened by his relationship status and my heart was full of pain a few times during the story.

Elle and Sarina are reliable at producing witty dialogue, sexy men and plots that keep you turning the pages despite the fact that the material itself isn’t all that original.  It’s really the character development that made me fall for both the authors and the stories they create.  There is pretty explicit sex so if you can’t handle m/m then you’ll need to steer clear.  But otherwise, I think this is definitely my favorite m/m series and I highly recommend to anyone who loves a good friends to lovers romance! 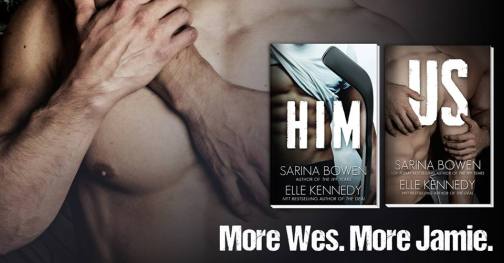 Haven’t begun the series?  You can meet Jamie and Wesley in Him!