Julia Boyd has dated more than her share of jerks, and she’s done even pretending to like them. Putting her dating life on hold and focusing on her event planning career is a much safer bet for the blue-eyed blonde…until she meets her newest client.

Organizing the opening for an art gallery should be a breeze for Julia, but gallery owner Alex Holt is becoming very distracting. Tall and muscular with enough charisma and sexy dimples to make Julia swoon, Alex could be the perfect man. The two of them click immediately, creating enough witty banter to ignite sparks.

But just before flames of passion can erupt with Alex, Julia begins planning an engagement party…and learns the groom is Aiden, the man who broke her heart years ago. When Aiden admits that he still has feelings for Julia, everything changes. Should she seek shelter in the familiarity of the past, or should she risk everything on a brand-new love? 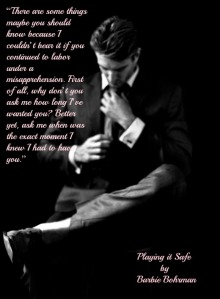 Turning into one of the far rooms of the gallery, which is almost like an alcove that only a few people can fit in at a time, I finally spot Alex.

Just me and him in this tiny space.

He’s dressed impeccably, as usual, in a pinstripe suit and a light blue dress shirt that perfectly accentuates his eyes. He’s not wearing a tie again, but that’s good for me because I get to look at his throat while his Adam’s apple bobs up and down while he talks. I know I’m being ridiculous, but something as insignificant as that is so very sexy to me in a really hot guy.

“What are you doing in here all by yourself?” I ask him before bringing the glass to my lips to take another sip. “Are you hiding or something?”

He smiles and ever so smoothly brings his line of vision down my body and back up again, but not before lingering a moment too long on “the boys.”

I knew it! Alex is a tits man, and I feel so vindicated it’s not even funny. In my head I’m doing the Running Man to the tune of Salt-N-Pepa’s “Push It” and giving myself a pat on the back.

“I don’t know, why would you be hiding?”

“Why do you answer every question with another question?”

Alex takes a step forward, and there he goes again crowding my personal space, but I’m standing my ground this time. He raises an eyebrow at my stance and says, “Maybe I like getting you all worked up.”

The double meaning in that is so not lost on me, and just like that, we went from zero to sixty in no time at all.

“Maybe?” I ask innocently while gazing up at him.

“For your information, I’m not hiding . . . at least not from you,” he explains. “Just like the quiet sometimes.”

“Huh. Always figured you for the type that was into parties and shit.”

“That would imply you’re thinking about me,” he says without missing a beat.

He takes a step forward and moves to my side to leave, but not before ducking his head closer so that I feel his warm breath fan across my ear. “That’s a good question. Are you ready for the answer?”

And then he’s gone, disappearing behind me back into the gallery’s exhibit, while I ponder what just happened, kind of pissed off that the son of a bitch just answered me with another goddamn question. 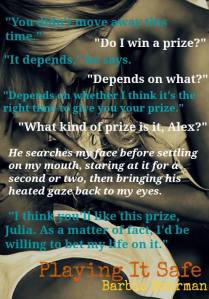 Playing it Safe is a fun and flirty read with likeable characters and witty banter that is sure to keep you engaged.

Julia has a tough exterior; but behind the facade is a woman lacking confidence in the wake of the broken heart left by her ex-boyfriend. His sudden reappearance has stirred up all those feelings of inadequacy and left her questioning her self-worth. Julia finds Alex extremely attractive and feels the shift that has transpired between them. Her flirting with Alex is harmless in her mind and Julia’s stubborn determination to keep Alex at arms-length only serves to encourage his advances.

Alex exudes confidence and control and is certainly not afraid to go after what he wants, especially when the pursued resists him ever so diligently. But Alex is determined to break down Julia’s attempts at playing it safe, and is not afraid to pull out all the stops to make it happen. Alex recognizes there is so much more to the magnetism between them if only Julia would succumb to the feelings that simmer just beneath the surface.

I was thrilled when Barbie announced she would be giving us Julia’s story and I LOVED every moment of this story. Alex’s pursuit of Julia was nothing short of entertaining and full of humorous exchanges, smoldering glances and steamy encounters. The witty banter was amusing, the chemistry between Alex and Julia was tangible, and the story was beautifully executed. I especially enjoyed the cameos from Sabrina and Tyler, the characters from Barbie’s debut novel, Promise Me, and I applaud Barbie on a job well done.

Barbie Bohrman was born and raised in Miami, FL and ultimately moved to the Garden State where she currently resides with her husband and two children. Life, and all that comes along with it and having long since given up on her dream of pursuing anything in the writing world, a prologue contest in a book club garnered her interest enough to throw her hat in the ring to see what, if anything, would come from it. From that contest came the roots of her debut novel, Promise Me. When she is not writing you can find her trying to get through the 1000+ books on her Kindle, or watching Lost or Seinfeld.

One thought on “REVIEW TOUR, EXCERPT & GIVEAWAY – Playing It Safe by Barbie Bohrman”